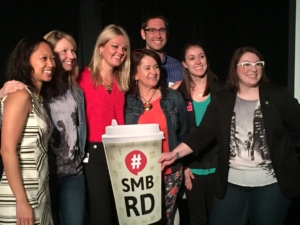 Tara Veer still shakes her head when she thinks of that moment. Newly elected as Red Deer Mayor in 2013, a lady approached her at an event and applied the friendly label.

“I was really struck by it because I hadn’t self-identified as that but what she was expressing was how much we use social media as a tool of modern government.”

Veer admits she was a reluctant tweeter – afraid technology would hinder human connection, not facilitate it. Fast-forward to today and Veer is a regular online. To her, social media is actually changing government.

She’s among the first-generation of municipal mayor’s using it to connect with voters and constituents. And her involvement in social media is propelling her to popularity not only in central Alberta but in the virtual Twittersphere. Do a search for the hashtag #mayorwhocares and you’ll see how much her digital constituents support her.

Tara Veer was born and raised in Red Deer and was first elected to City Council in 2004. She was always popular, voted Favourite City Councillor five straight years. In 2013 she was elected Mayor and became part of the “young mayor’s” trend in Alberta with Edmonton’s Don Iveson the youngest and Calgary’s Naheed Nenshi the elder statesmen – all three under 40 at the time. 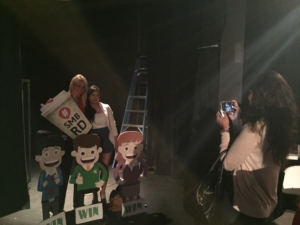 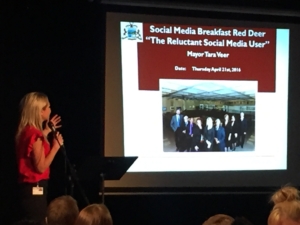 At a recent Social Media Breakfast in Red Deer, the largest ever gathering for the event held a virtual love-in for Veer.

Her embrace of social media as a meaningful way to connect with people suggests it’s not only legitimate but affordable, timely and influential.

Attendees to the event applauded her support and endorsement for social media – even lining up after the event to take photos with her.

Changing how Government is done

It’s about connecting – not just informing

“Social Media is one of the most powerful catalysts that’s compelling the transformation and modernization of government – by necessity. It’s the new normal,” says Veer.

Communications today is transforming – away from audience-based to participant-based. People no longer want to be seen as an audience – they see themselves as individuals who may, or may not, choose to engage.

“The former model of government, which was more traditional push-communications has shifted toward engaging with people and it’s actually making things more grass-roots because people are participating more.”

Veer’s story isn’t entirely unique. In North Bay, Mayor Al McDonald is being dubbed the Social Media King; and Vancouver Mayor Gregor Robertson is well-known for his social media savvy. In the very recent Manitoba provincial elections, social media usage was seen to skyrocket compared to only a few years ago. And where there is higher engagement – there are higher expectations. In Coquitlam, Mayor Richard Stewart is trying to get a handle on social media fallout from a well-publicized interaction.

All this can place stresses on internal processes. In some cases, in Red Deer, people will tweet photos of potholes and hashtag City Hall or Mayor Veer. From that they expect immediate reply and a quick fix of the pot hole. It still doesn’t work exactly like that.

There’s a balance to everything and being that visible has prompted some criticisms. Some people see the negative saying politicians shouldn’t spend their time taking “selfies” and should devote more time to civic business. Veer tries to handle that balance by including strong informational content in her social media posts.

“It’s highly important people know their elected officials are hard at work on their behalf. It’s important that the focus of your work is for your citizens and the delivery of service.”

Isn’t Social Media mainly for the young’uns who don’t vote?

This means communications, as a strategy, is shifting from Inform to Involve and likely toward Empower in the not too distant future.

One illustration of how Red Deer has joined that shift is by developing ways to engage with people in which they aren’t inviting citizens to attend City-organized events; but rather they’re attending events and crowd gatherings that are already happening. Once each year Red Deer City Council, and lead-representatives of its 30 departments, spend the day at a local mall just meeting and chatting with people who are there to shop.  “We really believe in going to where the people are. We also go to farmer’s markets.”

And Social Media has also proven to be a news channel. It’s a way for the City to tell the stories local media don’t think are stories. That’s not unique. During the 2015 Federal Election, Green Party leader Elizabeth May was excluded from one of the debates to limit participants. She chose to offer her rebuttals via Twitter that night and easily garnered more Twitter mentions than any other political leader.

Social media has obviously changed politics fundamentally. For politicians it has its clear benefits:

And it has its sharp edges:

When Veer was first elected to Red Deer City Council a little over ten years ago the City didn’t have a full-fledged Communications Department. It does now, including resources dedicated specifically to social media. Having full time staff on social media works for a municipality the size of Red Deer – other municipalities have chosen to outsource social media support, not just the activities of planning and posting but the development of professional social media strategies.