“A social media misfire resulted in the Stampede inadvertently tweeting that (two time Olympic gold medalist Kaillie) Humphries would be this year’s (parade) marshal, about 20 minutes before the official announcement. Stampede officials quickly deleted that tweet, before republishing it at 10:30am.”

A simple miscue clicking “send” on a tweet before the anointed time earned a mention in the Calgary Herald Wednesday. In and of itself the mistake is meaningless (hands up anyone who hasn’t clicked “Send” then tried to recall an email, tweet or Facebook post – anyone?).

So why is it news? Because news media is increasingly threatened by social media.

Once upon a time, not really so long ago, news media earned the right to bring not only stories to people, but information of things that had happened. Breaking news, exclusive news… the media doesn’t break much news anymore. As little as ten years ago a headline in tomorrow’s newspaper or introduction line in tonight’s TV version of the Stampede story might be: “Kaillie Humphries announced as Stampede Parade Marshal.” In today’s world that headline is old news – because it’s already been announced by the time the TV news story airs or the newspaper is printed.

Increasingly more news stories are being “broken” or “announced” via social media, which is what the Calgary Stampede was trying to do (they scooped themselves by mistake). The trend toward internet and social media-based news has been steady over the last few years. In 2012, schools.com put together the infographic below using research from sources including the Washington Post, Pew Research Center and Reuters.

For journalists, this is a threat – social media is changing how people learn about news. Journalists know news on social media will ultimately result in erroneous reports that will eventually lead to perpetuating untruths or even myths that can be difficult to erase from people’s psyche (facts don’t always win the day – i.e. climate change).

For the business people within the news media, it also changes the revenue stream. According to the Pew Research Center, online news is encroaching the revenue generation of print newspapers. 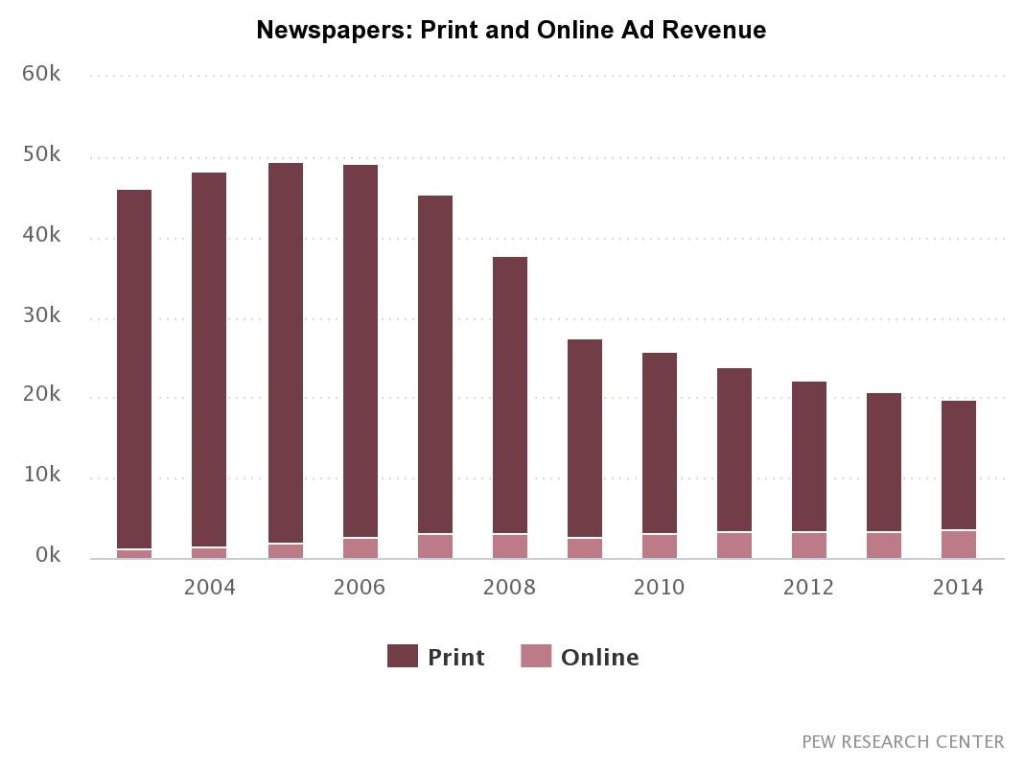 News consumption habits are not only shifting to digital, they are shifting away from traditional sources including online newspaper and television reports. People trust their friends on Facebook or Twitter to recommend relevant and topical stories. So the news media is left to carve out a new niche for itself. If it can’t be the news breaker, it can try to be the news filter.

In the UK, the Guardian newspaper launched a brand campaign aimed to convince people it was the best source to help people filter out the news noise. This is captured remarkably well in its Three Little Pigs advertisement:

Interestingly, this is the approach most news magazines have taken for years – published well after news stories had been told the first time, magazines have always taken to providing a form of analysis or filtering for their audiences.

Business organizations recognize the opportunities to gather mass audiences via social media and have taken to making announcements on Twitter, Facebook or LinkedIn. The news media isn’t the sole vehicle for the source anymore – nor has the source become the only vehicle. The information highways are now cluttered with vehicles (you and me). The demand for information is increasing substantially but the supply of vehicles to receive that information is also increasing.