Two of the most important things you can do when giving a presentation is make eye contact with your audience and use your hands. New research involving a storytelling robot shows people respond better, understand more and remember much more when you do.

In a recent study participants said when a robot told them stories, looked them in the eye and used hand gestures the message was much clearer and recall of themes and facts was easier.

Researchers based in Holland and Singapore commissioned Nao the robot to recite the old fable “the Boy who cried Wolf.” A human voice recording was broadcast through the robot. 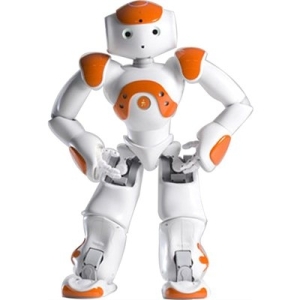 To the first group, Nao simply told the story without gazing at participants or using gestures.

To the second group, Nao told the story and used hand gestures but no eye contact.

To the third group, the story included Nao attempting to make subtle eye contact with participants but no gestures.

And to the fourth group, Nao used both eye contact and hand gestures to augment the story.

The results? When people perceived Nao to be making eye contact with them, they responded more favourably to the story. The additional use of hand gestures did little to augment the experience but did not detract.

What does this mean for presenters? It further drives home the critical importance of eye contact. Even when a storytelling robot seems to be making eye contact with people, they respond more favourably. It also illustrates that hand gestures are fine if you’re a natural hand talker. And if you’re not, simply keeping your hands at your sides is fine – just don’t fidget.

So why is eye contact so powerful to us humans? Because brain science shows eye contact produces a powerful, subconscious sense of connection that extends even to drawn or photographed eyes. Researchers at Cornell University examined the extent to which eye contact with cereal box spokes-characters influences feelings of trust and connection with a brand. Sixty-three people were asked to view a box of Trix cereal and rate their feelings. Participants were randomly shown one of two versions of the box, in one version the rabbit was looking straight at the viewer and in the other the rabbit looked down.

The results? Brand trust was 16 per cent higher and the feeling of connection to the brand was 28 per cent higher when the rabbit was perceived to be making eye contact.

Eye contact counts; it builds and enhances trust. All communications strategies ultimately boil down to trust.

Eye contact should also be considered using the Goldie Locks principle – don’t stare people down, that only intimidates.

If you’re presenting virtually, as in a webinar or a video conference, the challenge is a problem called “parallax.” The participant on the other end is viewing the input from the camera on top of your screen while you’re looking at the screen instead of the camera. Look at the camera, make virtual eye contact and a better human connection.