Imagine you check Twitter one morning and find a story trending about a child who suffocated swallowing a toy from a meal at a fast food restaurant. You read the first news story that appears in your feed, then begin to look at some of the comments online.  Of course, you begin to shape your own opinion as to whether the company or the consumer might be to blame.

Would you make up your mind on your own or be influenced by the tone of the news story? Would the reader comments influence your opinion?

In a recent social experiment, researchers Seoyeon Hong, Ph.D., of Webster University and Glen Cameron of the University of Missouri-Columbia, reached conclusions that not only are our opinions influenced by social media comments but those comments are, in fact, more influential than the raw information or the tone of the media story itself.

The researchers polled 389 participants online. They showed them fictional news stories of companies facing a crisis followed by faux reader comments and social media “likes”. The participants didn’t know all of this was made up, they thought it was real. 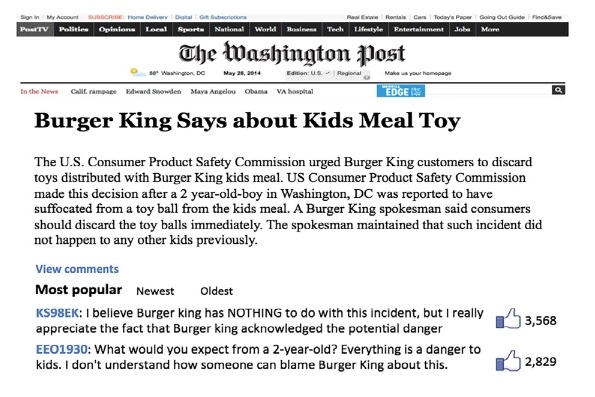 Another group was shown the same story but with negative comments.

The scientific theory to why this happens is contained within two elements. One is we have evolved to be social creatures who seek to fit in with society. We learned to co-operate in small groups or tribes to survive.

Another element is something called “heuristics.” We’re wired mentally to find mental shortcuts to conserve brain energy so when a large group of people appears to have reached a conclusion, we’re more likely go along with that. Moreover, there’s science showing we’re more likely to choose messages that are consistent with what we already think and feel and filter out messages that aren’t. In other words, we choose information that is agreeable with our established beliefs.

There’s a perception that online comments are made by friends and neighbours and, therefore, more objective. And in this day of information overload, online algorithms have been designed so comments that receive the most “likes” appear at the top of our feeds.

What does this mean for communications strategies?